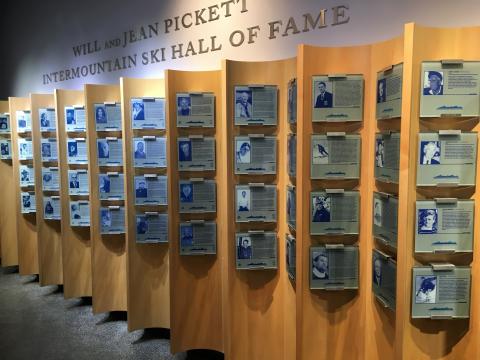 UTAH OLYMPIC PARK, Park City, UT – The Class of 2020 Intermountain Ski Hall of Fame welcomes inductees Randy Montgomery, Howard Peterson and Larry Warren. These inductees have numerous qualities worthy of the recognition, but there is a common thread that is paramount: an undeniable zeal to advance winter sports in the region to a higher level.

While the COVID-19 pandemic has caused the postponement of the September 24, 2020 induction dinner and awards ceremony that was scheduled at the Alf Engen Ski Museum, plaques highlighting the accomplishments and photos of the trio will be installed in the museum’s hall of fame in September, as per usual, says museum Executive Director Connie Nelson.  Date for the induction ceremony is yet to be determined.

The 2020 installation will bring the total number of honorees to 83. The Intermountain Ski Hall of Fame was launched in 2002, the same year the museum was opened after serving as a media sub-center during the 2002 Olympic and Paralympic Winter Games at this Utah State Park.

Museum Director Nelson informs that nominations for the Jean and Will Pickett Intermountain Ski Hall of Fame, named in memory of two late promoters of skiing in the region, are welcomed from the public. A selection committee comprised of ski historians, race officials, former racers and others with extensive knowledge of the region’s ski scene reviews nominations. That group presents a selection to the volunteer board of the Utah Ski Archives for final selection. The archives board’s other primary role is to conduct the annual Ski Affair, a fund-raiser for the library, an event cancelled this year due to the COVID-19 pandemic.

The Utah Ski Archives at the J. Willard Marriott Library collects, preserves and makes available to the public the history of skiing/snowboarding in the region. Since its founding in 1989, the archives have grown to become one of the largest such archives in the country, used by historians, researchers and reporters worldwide.