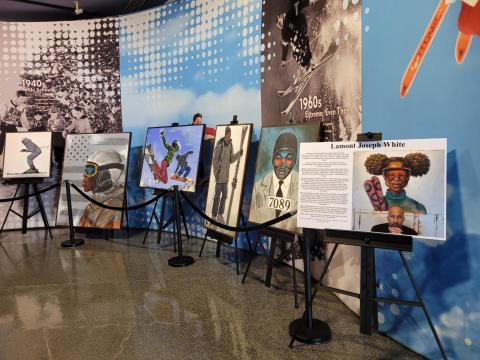 Inclusion and diversity are always important for Artist, Lamont Joseph White. It is often said that race does not matter or that color isn’t seen. Lamont prefers, instead, to observe our differences so that we can better embrace them.

Lamont was born and raised in the New York City metropolitan area, where he found that he never lacked visual inspiration.

Modern and traditional approaches, especially classicism and renaissance for their academic forms and beauty are the formation of Lamont’s influences. While impression and abstract approaches speak to his sense of contemporary times.

Having received his BFA from FIT in New York City, Lamont continued studies at The School of Visual Arts and The New School. As a student, he was fortunate to have an incredible creative environment and passion for the arts early on. During his schooling, two renowned illustrators, Jack Potter and Antonio Lopez, took him under their wings and contributed greatly to his approach and creative direction.

Other Exhibitions have included The Society of Illustrators and various other New York City metro area galleries. More recently his work can been seen at Ski Utah Headquarters, Snowbird resort and the Christian Center of Park City.

These days Lamont resides in Park City Utah with his wife, Jeannine and their dog, Bowie.